Here at Recognition Source, we offer a variety of award clocks, perfect for earning a proud, prominent spot on a mantle or desk of the most valued employees — serving as a constant reminder of the bond between employer and employee.

In fact, gratitude is often cited as one of the most important employee requirements. For some proof, non-cash rewards achieved three times’ the Return-On-Investment than cash-based incentives, according to a 2010 study coducted by WorldatWork. Often when cash awards are used, people confuse this with compensation — as something that is owed to them and the award instantly becomes less meaningful. When you give custom engraved crystal awards, there is no mistaking how special and invaluable the recipient is to the company.

A third of people who receive cash awards simply spend that money on bills; 11 percent buy household items; and 18 percent don’t even remember what they did with their reward!

Ok, back to the clocks. While our clocks aren’t as cool what’s below, ours are certainly better suited for a corporate award. So the last thing anyone needs in the morning is something complicated. This alarm clock recognizes which way is up and sets the alarm accordingly. One side is ‘ON’ while the other is ‘OFF’ – just that easy. This is pretty original, and not at all quick to read – unless you’re a mean dominos player, I guess. The first domino is the hour, the middle is the minutes (tens) and the last domino displays the specific minutes. So, what’s pictured is: 12:59 – 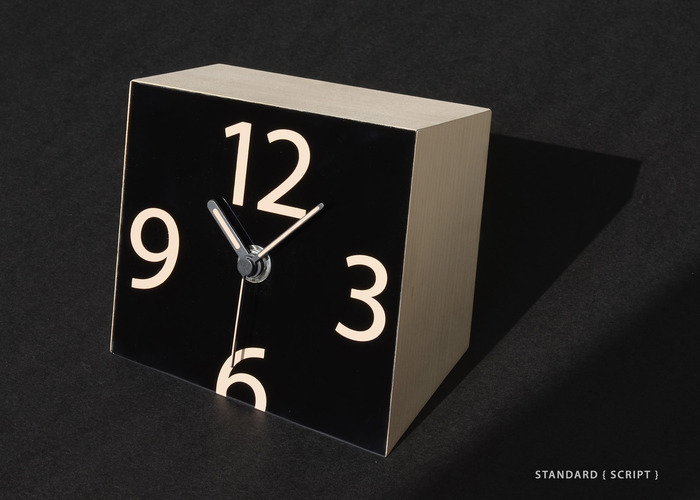 This is an artistic, functional analog clock with its roots in Kickstarter. This project was asking for $9,000 and exceed that goal by over 3K. A pretty simplistic blend of form and function that would look great on a mantle of coffee table.

To make this simple, soft dome stop beeping you awake; just punch it – sounds satisfying doesn’t it? Don’t get too excited, this one is only a concept design, but man, what a good idea.

This sleek alarm clock was design with couples and the hearing impaired in mind. Just slip one of the rings on, with separate alarms for each, and awake to a vibration in your finger, allowing your partner to continue sleeping.

This one is kind or ridiculous – but if there’s an alarm clock that cooks bacon for you in your room, then this isn’t so crazy, right? This is another concept design that allows you to both wake up and be put to sleep with your designated smells.